Forest of Wyrd Session #61 - Into the Temple 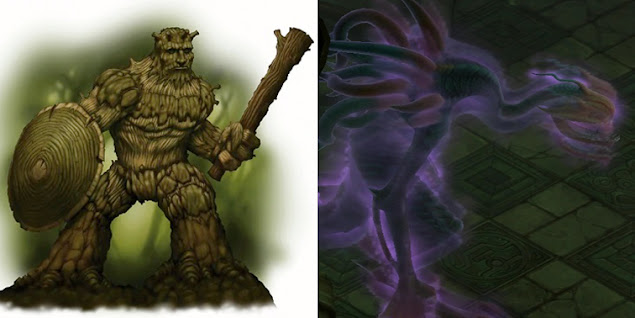 Knowing they could not step into the clearing without attracting the wood woads attention, the party decided to line the edge of the trees and shoot them down with arrows. And hopefully they would not retaliate. Unfortunately for the party, the creatures were not dumb enough to sit there like fish in a barrel, and they advanced in a skirmish line.  Thrax gulped a potion of growth and then battle was joined. The party was able to slay quite a number of the woad before the last few fled back into the woods. The party suffered little damage. That said, Vegarious did end up wracked with pain and agony as her muscles twisted and knotted after one hit from a wood woad.
Once the clearing was empty, Hobbs flew up onto the roof of the building to keep watch while the rest of the party crossed the field. They first climbed up the raised columnar platform  to an opening at the east end of the temple. Inside they found a pair of statues. One of a rustic looking young woman, obviously human; the second of  lord of Faerie. Jonesomon sized them up for a bit, and declared them to be Crindis the Hidden one and Liadan, daughter of the last High King of the D'war. These, he explained, were the parents of the Half Blood King and thence the grandparents of the Prince Who Would Be. Ranza and Gnarl joined the specialist in a search around and behind the statues, but found nothing of interest.  The still double sized Thrax then proceeded to rip them from their bases, but again nothing was found.
The party now moved around the colonnade to the front where the main doors were found. These were of some untarnished silver metal, decorated with a carving of three trees with intertwined branches; one red, one black and one green.  After a search for traps, mega-Thrax tapped the doors open. Beyond it was a long narrow chamber, also surround by a raised colonnade. At the end was a black alter or stone overlooked by a tall statue. Details could not be seen in the low interior light.
But before the party could enter, Hobbs called out a warning from above. Something or someone was rooting about their raft, so the hedgefey launched Wattles into the air to investigate. There he found a wood gnome poking about their supplies. When challenged, the fellow seemed unperturbed and likewise  appeared to know Hobbs. He was in fact Silnor, the wood gone they'd rescued while following the Twilight Path. He agreed to follow Hobbs back to the rest of the party to explain his presence. Silnor it seemed was carved by his father many years before to watch over this refuge of the Prince Who Would Be. He explained that when the Prince was taken away to safety after his fathers death, the three peoples of the wood agreed to each build a refuge for him. The temple was that built by his human followers. Silnor's father was to lead the construction of another refugee from the wood spirits, but something went wrong with both it and the one to be built by Faerie. And somehow through all this, the Prince disappeared. Pushed  for more info, Silnor would tell them little more, even when they professed their goal to bring the Prince back to rule the wood. The wood gnome said only they would need to prove themselves capable and worthy of that quest without further help from him; it was not for him to deliver the Prince into the hands of those who were not able to protect the Prince on their own. He did leave them with a hint to set them in the right direction, reciting a short rhyme:

·         "The Prince burns with the inner fire that drives man. His blood flows as the water that isn't, of which his mother is born. And his soul holds a hint of darkness made real from beyond the veil."

With that cryptic word, the wood gnome turned and headed back into the trees.
Better informed but still confused, the party once more turned back to the temple. Sparking up a light source, they entered the narrow hall and headed toward the stone and statue at the end. The stature was of the Half Blood King  and She Who Wore the Crown of Stars, holding a baby in their arms, presumably the Prince Who Would Be. The black stone on the other hand held a large bronze book stand, on which was the remnants of a large book. In fact just the covers and a few scarps of parchment. Ranza and Jonesomon had big-Thrax lift them up on the inside colonnade to search around the statue. First thing they saw was a trio of small bowls in front of the statue. They were carved of three large gems: blue lapis lazuli, red fire opal and black jet. And carved in the base of the statue was a single line:
"Fire which is not fire; water which is not water; darkness which has form"
They guessed these bowls had to be filled (with what they didn't know) to let them find the Prince. But for now they turned to their search around the statue. They found nothing, but when Gnarl pulled out his greenstone to search he was able to direct them to a secret door behind the statue.  He could see it lead into a small room with another statue -like object and stairs going down. But before they could get in there, it took some searching to find the way to open the secret door; by twisting the two closest pillars on the inside colonnade.
Passing into the secret room, they saw that the statute was actually an armorers dummy. Which was surround in the ghostly blue form of armor and a sword. Closer examination gave no other information, so down the stairs they went. Lead by Jonesomon looking for traps, the party shortly found themselves in a chamber lined with black slate. The stones seemed to emit a thin oily mist that drifted about their ankles.  They started to explore, first finding a patch of broken flagstones behind which was a mass of tiny tunnels just a few inches high. But they didn't get a chance to examine them any closer, for at this point a hideous creature of darkness, claws and tentacles emerged out of the wall behind them. It attacked in lashing of claws and tails, as well as a mental blast that alternately caused fear, confusion or paralysis. Luckily most of the party was able to shake off these feeling, although neo-Baihu did succumb and turned in confusion on the party, webbing several of them in place as the monster attacked.  Both she and Jonesomon were later driven into flight from fear as well.
In the end, the party prevailed, destroying the creature by their combined efforts. With the final blow, the  monster disappeared into mist, which then coalesced into the form of a large black  pearl sitting in  pool of thick oily black liquid. They recovered the pearl, and Gnarl also scooped some of the oily liquid into an empty vial, thinking it may be the darkness to which the rhyme on the alter was referring. He also grabbed a small chip of black stone for the same reason.
The party then moved on to explore the rest of the greasy maze. They survived an attack by massed rats thanks to Thrax's gust of wind, and were distressed after passing though an area that dispelled all their magic (but thankfully only temporarily.) They then spent some time examining a trio of odd forges. These had no flue or chimney, but burned with a cold black flame. By trial and error they discovered when ashes or burned material was placed in the flame, it would 'burn' it back to into original form. Not sure what that meant in the bigger picture, the party opted to head back to the temple above. It now being late in the evening, there they prepared to set up camp to rest the night.
TOTAL XP
5750
GAINS
Giant Black "Pearl" [2000sp]
KILLS/VICTORIES
7 Wood Woad
The Form of Darkness
LOSSES
none
Posted by ChrisS at 8:56 AM

Email ThisBlogThis!Share to TwitterShare to FacebookShare to Pinterest
Labels: Campaign, Forest of Wyrd, LotFP, Prince Who Would Be, Session