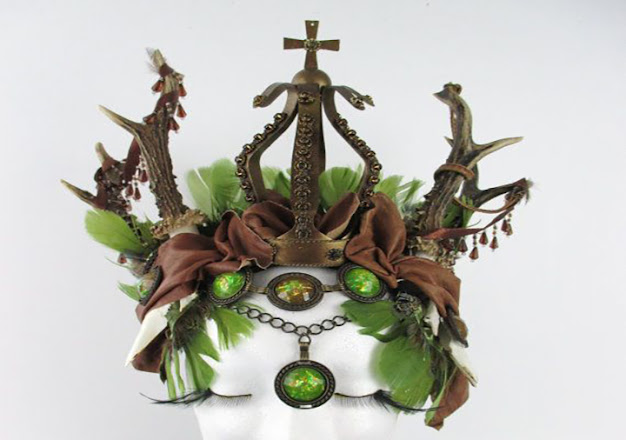 Still thinking the 'real' crown was somewhere in the garden, the party searched some more around the stone block. Using the nightmare to move the petrified guardian, they further searched under and all around where he'd been sitting. But found nothing. They even had Gnarl use his ring to turn the stone guardian inside-out with stone shape, thinking the Crown might be inside the creature. But no luck.  Finally giving up, the party settled in to rest for the remainder of the day and through the night, to be in a better position to face She Who Wore the Crown of Stars. Hobbs (with Slugs in tow) decided to go check the glowing green pool once more. The hedgefey played with the water, drank some, splashed it on his head, and finally reached down as far as possible with Slugs' spear to plumb the depths. He did not reach bottom, but as the spear was being pulled out, something grabbed onto it. And out of the fountain emerged one of the green men, a Jack-in-the-Green, who turned on the pair in a vicious attack. A short and bloody fight ensued, ended by the timely arrival of Gnarl and the insertion of his spear through the creatures back.
Two other surprises arrived as the party settled back into the garden to rest. The first was an attack by 5 ranine, the frog-creatures crawling out of the depths of the pool. A well timed entangle caught three of them, while the other two splashed back into the pool once they realized the odds were against them. The second surprise came once night fell. The overhead dome, until now dark, opaque and impenetrable, faded away as darkness fell outside.  Hobbs hopped aboard the nightmare to fly up and investigate, finding the passage free and emerging under starlit skies for the first time in days. Quite a few days more than he thought it should be, for his giant swan mount and the donkey, left behind on the raft, were is terrible shape from near starvation. He brought the swan into the garden to feed and looked after the donkey, making sure the swan returned outside before sunrise before the dome (presumably) would reform. Which it did. This then was what the old man on the island was trying to tell them; that the dome disappeared in the dark.
All that done, the rest of the night passed without incident, and the party arose to gird their loins before facing She Who Ware the Crown of Stars.  Their first plan was non-violent trickery. While the rest of the party waited nearby in support, Gnarl (under the cover of invisibility) would use the stone shape  power of his ring to pin her to the stone bench on which the Half Blood King lay, then swipe the true Crown. This unfortunately didn't work, as somehow the daughter of the Green Man sensed his presence and turned on the wood gnome. She raised her hand, and banished him to the distance space between the stars. The rest of the party moved in then, trying still to subdue her with a range of spells. But She shrugged it all off and fought back. Several more attempts at banishment failed, but she kept pulled star-stuff from her hair which animated and attacked the party, sticking on and draining their life-force. Eventually, out of non-violent options, Thrax lead the party in the old fashioned solution; swinging swords. But he also used the gust from his sword to hold her back, allowing Hobbs to sneak in and grab the Crown and Sword, thinking there might still be a way to trap her and escape with their loot. As the battle raged, Slugs fell with a near-mortal wound, saved only by quick ministrations from his employer. But after a hard fought battle, in the end She was cut down and now lay at rest near her husband. Curiously though, when Hobbs checked the body, he certainly got the impression She was not 'fully' dead, though he was uncertain what that boded.
Gnarl returned from his sojourn among the stars just as the battle ended, and the party stared at the Crown in Hobbs hands. With a sudden impetuous movement, the hedgefey popped the artifact onto his head. And was immediately filled with rage, turning on Thrax and seeking to kill him and drink his blood. This battle royale proved to be bloodier than the fight against She Who Wore the Crown of Stars, with the rest of the party siding with Thrax and trying to either immobilize Hobbs or knock the Crown from his head. In the end, Gnarl was able to thrust his spear under the band of the crown and rip it (along with a significant portion of fur) from Hobbs head. At which point the murderous rage passed, and Gnarl pointedly wrapped the Crown in a burlap sack and his it away from Hobbs.
After a last check throughout the upper tomb using the greenstone, the party waited for nightfall and exited through the once more open garden.  And then with little ceremony, made their way back towards Twitten's Hollow to rest, recover and plan the next stage of their quest: presenting the Crown of the Forest to The Prince Who Would Be. And probably explaining to him why they killed his mother.
TOTAL XP
14250
GAINS
Crown of the Forest [8000xp]
Starblade (Longsword +3, summon starfall 3x day, teleport 1/day)  [2000xp]
Golden Scale Armor of the Half Blood King (Chainmail +3) [2000xp]
Dagger of the Night (Dagger +1, blindness) [600xp]
KILLS/VICTORIES
1 Jack-in-the-Green
2 Ranine
She Who Wore the Crown of Stars
LOSSES
Slugs MacKenzie (almost)
Posted by ChrisS at 8:58 AM