Forest of Wyrd Session #53 - Jonesomon , Beavers and the Crazy Man 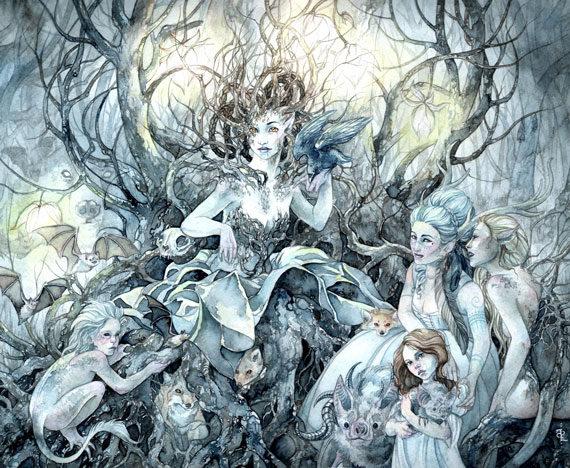 The party escorted the rescued merchants and their new guards/erstwhile captor's to Kreland's Ford. There they parted ways, the party taking their reward in portable wealth and opting to bypass the town. They didn't want to answer questions about why neo-Jonsomon was trussed up and gagged. In fact, they just didn't want to deal with any neo-Jonesomon issues, suspecting he may be known and wanted in the town for his banditry. So they slept in the woods for the night, and then started their journey north to Twitten's Hollow and, hopefully, an audience with Queen Botsum and King Thorbus. The two day journey passed without incident, and they arrived at the great white bridge. Paying the Thayn's men their toll, the party proceeded to the other side, and was disappointed to not find one of the seelie court awaiting them. Instead there was a scrap of paper, which unfolded into a rather elaborate scroll announcing that the toll for passage was the cry of a human child. That threw the party for a loop momentarily, but they backtracked to the two men on guard and somehow got one to agree to bring his newborn to the bridge that night to provide the fee (in return for payment of a fee, in silver, to himself of course) .

The guard was true to his word, and that night joined the party at the far end of the bridge. He was nervous and held the child in a death grip, but a little teasing with a bottle of warm milk from Thrax's robe elicited the necessary sound. At which point a short fat goblin dressed in brown appeared, seemed to inhale the cry, and then  proceeded to thank the party for their payment. He was about to disappear again when Ranza interrupted, to say they wished an audience with Queen Botsum. That required some negotiation and payments to the goblin  before he would make the arrangements, but in short order the party (less the father and child who'd wisely bolted by this point) was lead into the fairy shee, and in moments the full fairy court had appeared. Queen Botsum appeared to be quite pleased to see the party, and she gladly answered the question about THEIR Jonsomon and his whereabouts. The fairy queen explained that Jonesomon was no more, having merged with neo-Jonesomon to become the 'whole ' Jonesomon. Nothing short of the most powerful magics would bring him back. At which point Gnarl piped up, reminding the party he still retained his wish from the path of the black dog. And so the wood gnome used it to wish that their Jonesomon had survived the encounter rather than neo-Jonesomon. And within the blink of an eye,  neo-Jonesomon was gone, replaced by the 'real' Jonesomon. Who was more than a little confused about what was going on at this point.

Thanking the royal couple once more, the party took their leave and headed to town for the night. Next day they headed west to follow the directions given by Eya to the Tomb of the Half Blood King. They passed over the river and turned to head south, skirting the edge of the Mere of the Green Man. The first day passed without incident, except for the very slow going in the trackless forest. On he second day they came to a large clearing in the, until then, dense and primeval woods. In the centre was an old stone well, overgrown with moss and vine. Approaching cautiously, they party found that on initial inspection it seemed to be just an old well.  But curiously, anything that went down it came right back up again. Clearing away the moss and vines reveled an inscription: "Three they be, but one they are. If two agree, then cursed though are". On close inspection, Ranza noted the word 'cursed' seemed to hover over a palimpsest of the work 'blessed'. The party wracked their brains for a bit, but couldn't make heads or tails out of the whole situation. And in the end, decided this was just a distraction from their goal. So the party headed off to the south again.

The next day, they reached a stream flowing into the Mere, the point at which Eya had told them to head upstream. But there wasn't much of a stream, just a bare trickle. Which didn't quite match their expectations. But they followed it just the same, and soon discovered why the paucity of water. Coming up onto a rise, they looked down to the west to find a huge dam across the stream, which had caused the water to back up and form a lake miles wide. They could see something on the dam below, and headed down to see if they were friend of foe. They were in fact a trio of huge beavers, lead by a grizzled old one who called himself Farquir Old-Tooth. For not only were they huge, they spoke Common. Asked about a tomb, the beavers could tell them nothing; they just tended the dam like their fathers, and fathers-fathers, and fathers-fathers-fathers, and so on. Asked about the lake, they said may strange creatures would be found there, like strange frog men. Asked if there was any one else they could talk to, Farquir noted two cleared spots to the west. One on a small island, where a weird little man lived. And the other a high headland, where a knight on horseback dwelled. Maybe they could help? He also pointed out two misty patches over the lake, one green and one white, warning the party to avoid them.

The beavers seemed eager to get the party out of the way so they could return to work, were glad to carve them a raft to allow the landlubbers to cross the lake. And so the party headed first for the island. Along the way, they encountered a strange round spongy thing floating above the water. As it approached, Thrax opted to use a gust of wind from his sword to blow it away, at which point the thing vanished and the party landed on the island without further incident. They were met at the waterline by a wild man; short and knobby kneed, with an ankle length beard and no clothing. He immediately was attracted to Jonesomon, trying to snatch the  ioun stone which orbited around the specialists head.  When unsuccessful, the man accosted Hobbs, indicating by broken word and pantomime that he wanted a shiny stone. Hobb complied, giving him a small unpolished gem. The man then went through an elaborate act of cupping the stone in his hands, hiding it from the light so it 'disappeared'. But then becoming very frustrated and aggravated when the stone reappeared in the light when he opened up his hands, as if the disappearance of the stone seemed somehow significant. This went on for some time, even as several of the party explored the rest of the island (finding nothing but the mans crude hut, hung all over with small rock crystals.)

In the end, the party could not understand what the man was getting at, and decided to push off and head for the knight on the headland. Leaving the raving lunatic behind, they headed across the lake, only to have the green globe reappear. Once more Thrax used his mighty gust, but this time the thing continued to chase them. So while a few tried pelting it with arrows, everyone else pulled hard on the oars, beaching the raft below the headland and scrambling ashore as quickly as possible. At which point, the green ball disappeared again, leaving the party to contemplate the climb to the headland above ...

TOTAL XP
0
GAINS
none
KILLS/VICTORIES
none
LOSSES
none