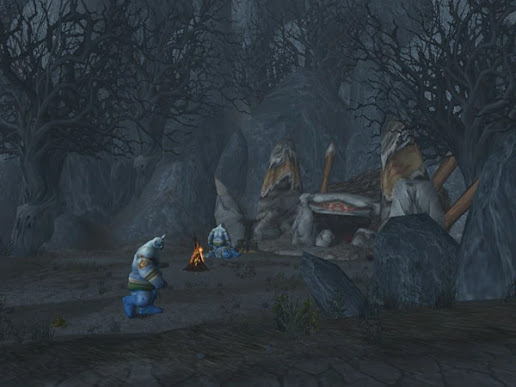 The party waited for the moon to pass it's zenith before putting their assault plan into place. First, Ranza scouted the camp while still invisible, trying to pinpoint the number and location of the ogres. She slipped across the open hilltop towards the back of the crude huts, and by peaking through gaps in the crude walls and/or listening was able to locate 3 or 4 ogres sleeping/resting in various huts. There were also 3 or 4 sitting around the blazing fires. And another was discovered patrolling the perimeter of the hill top by the rest of the party, who had to pull back deeper into the woods to avoid being spotted. Ranza also noted the ogres seemed well organized, maintaining and changing watch all night.
Almost noticed several times, the changeling made one more stop before heading back to the party to report. She slipped in to the closest prisoner cage, and whispered a warning to the pair inside. One seemed dazed and barely noticed the disembodied voice coming from the darkness. The second sat up with a jolt, and Ranza had to calm him down so he didn't give her away. She warned the man (Vorg) that help was coming and they should try to escape in the confusion if possible. She slipped him her dagger just in case, and hen headed back down the hill in the darkness to rejoin the party.
Once Ranza explained the layout and occupancy of the camp, they put their assault plan into action. Vegarious cast invisibility on Hobbs, who then used his stealthy ability to head over to the huts and start dousing them with the party's oil supply. Gnarl and Ranza then gulped their potions of flying to get over top of the camp. Gnarl started to torch the now very flammable huts, while Ranza started to cast spells from above. This of course got the ogre's attention, and a great bellowing and screaming emerged from the burning huts. Ogre's started to pour out of the blazing shelters, joining those around the fire. Several, including the big leader, headed towards Gnarl where he stood torching and entangling. Others rushed down the hill top to the tree line, where the party now revealed themselves with a shower of arrows. Vegarious used her new wand of cold to great effect, freezing multiple ogres and keeping the party from getting overrun. The situation still looked dire, as Gnarl and Ranza struggled against the group still in the circle of firelight. Hobbs took this opportunity to summon help, using the necklace to call for Diamur Without Peer. The fey lord appeared, someone annoyed but ready to fulfil his vow. He and Thrax rushed into the open and up the hill top to take on a pair of as yet unengaged ogres.
By this point, Vegarious had frozen four of the ogres, then Ganrl and Ranza took out the huge chief. That was enough for the rest of the clan, who turned and fled over the opposite side of the hill. Several more were cut down in the rushed retreat, but several did escape into the forest and the night. But the battle was now over, and the party could pause to catch their breath. The prisoners were released; when questioned, they reveled all had been captured by the ogres and were being fattened up to be eaten. Right now, they just wanted to get away from here an back to Twitten's Hollow or their homes. As for the fellow tied to the standing stone, it proved to be another wood gnome by the name Silanor. He too had been captured but the ogres apparently didn't think he looked very tasty. Instead they kept him around to repair their gear and perform odd jobs. They tied him to the stone as they thought he would keep the magic of the stone, whatever it may be, at bay.
Speaking of the stone, the black dog now emerged from the woods and trotted over to it. Stopping next to the black monolith, it turned to look at Gnarl, as if waiting for the wood gnome. Well, this is what they'd come for so no point waiting any longer. Gnarl stepped over to the stone and touched it. Once more the dog began to writhe and fade in and out of existence, before finally setting back again into corporal form as a huge 8' high mastiff. This time it turns on Gnarl with a snarl, and attacked the wood gnome. He fought back with his spear, and when the rest of the party tried to help they found some kind of invisible barrier prevented them from doing so. So Gnarl was on his own, and though it was a close fought battle, he in the end succeeded in slaying the beast. As it fell dead, the dog once more transformed, this time back to it's original form and size. It walked over the Gnarl and for the first time touched the gnome. This gave Gnarl a surge of power, making his feel more vital [ability point increase] and the dog also bestowed a wish upon him. The rest of the party who'd accompanied Gnarl on his quested likewise received a boost of power[ability point increase].
With it's task completed, the dog took one last look at the party and headed back into the forest, going south east. Dimaur Without Peer likewise took his leave, brusquely informing Hobbs his obligation was now ended, taking the necklace before disappearing.  Meanwhile, the rest of the party searched the camp and uncovered a small pile of treasure buried in one of the huts. And with all the excitement over, the party and prisoners (less Silanor who likewise slipped away into the night) settled in just off the barren hilltop to rest for the night, before proceeding the next day to Twitten's Hollow.
TOTAL XP
2504
GAINS
677sp
potion of polymorph
small brass cauldron with beaten sun patterns [250sp]
KILLS/VICTORIES
7 ogres
LOSSES
none
Posted by ChrisS at 9:07 AM