An encounter from my Labyrinth Lord Far Isles campaign inspired by the Robert Duvall "I love the smell of napalm" scene from "Apocalypse Now". Setting is in the bayou backwoods where the forces of two coastal city states are hammering away at each other. Unknown to the fighting forces (but known to the PC's at the time), the war is actually over but word hasn't reached the back country yet.

If you're interested in how this played out at our table, the session report can be read at:
http://dragonsbreakfast.blogspot.com/2016/07/far-isles-session-39-assault.html 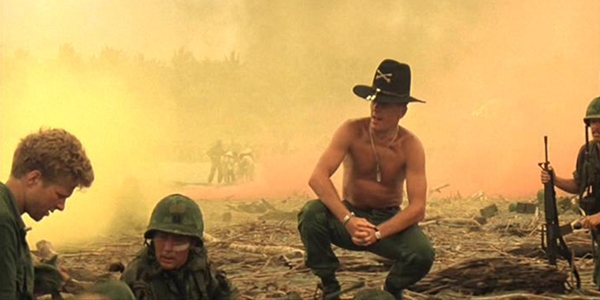 A small company of Xin musketeers are trapped on a sandbar.  They  laying siege to a force of Cha'nrk  raiders, holed up in an old fort on an attached island. Both have lost their boats and are stuck here. No one knows the war has ended.

Trenches and parapets with cover, burned bodies in no-mans land. Wet and smoky.

Captain Solond insists on pushing on with their fight, and will not believe the war is over without proof. Sergent Lunt can be convinced either way about the war, and is happy to abandon the fight.
Both will try to get the boat from the party, by hook or by crook; Captain Solond 'officially', Sergeant Lunt by underhanded means if necessary.  The men could go either way, or both ways.

Part of a raid on Xin, separated from the main force and escaped upriver. Trapped now. Would offer all sorts of rewards for help escaping, and would even keep their word. But if they have to play nasty to get the boat, look out.

Notes
From a rules perspective I used Labyrinth Lord. "Mk" refers to the musketeer class I came up for the campaign. Details at: http://dragonsbreakfast.blogspot.com/2014/12/character-class-musketeer.html