Edge of Night Sector .. or How I Spent My Christmas Vacation

After running D&D for my face-to-face game group for the last seven years, I decided needed a bit of a break from swords and orcs for awhile. For various real life reasons, I also needed something that required little or no new game prep and no need to gronk new rules. I'd put together a short Classic Traveller game about a year ago that never quite got off the ground, so we decided to try a reboot (the original campaign background is here). It was pretty much ready to run right away, and after several years of playing Classic Traveller myself,  I'm starting to internalize the rules much like I've already done with B/X D&D. So no problem, no prep ...

And of course I then proceeded to spend untold hours over Christmas rolling up a full sector, of which the players will likely never see more than 2-3 systems. Behold, the Edge of Night Sector! 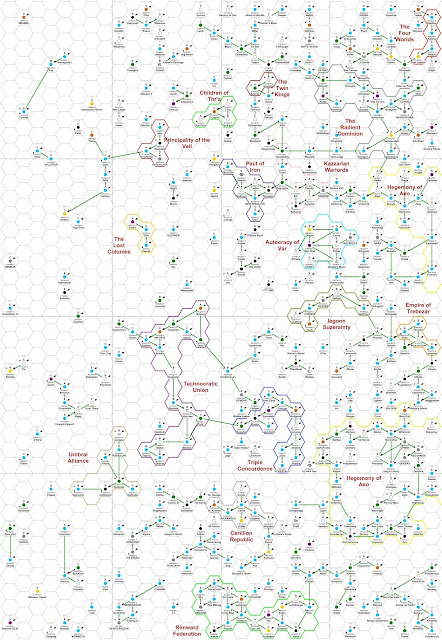 To be fair, a few of the sub-sectors were all ready done. That said, 453 worlds and 5889 rolls of the dice later (not counting trade routes), a few thoughts on the process: