They waited under the dome for about a day, but nothing happened. The party crowded once more around the bowl to ponder further steps. Kwinsea took a closer look at the seeds, and determined they were ordinary pomegranate seeds which ranged from relatively fresh to long desiccated. Chaff decided to eat a few, a difficult task given his mouth full of broken teeth. But they had no effect. Kwinsea then wandered back through the sand dunes to find a crab to speak with, to learn more about the comings and goings around the structure. The crab, in his crabby way, confirmed that the Firebird Amazons came to visit on their giant flying snakes, no more than once a moon. One would go over to the bowl, drop something in and then the whole structure would sink into the sands. The others would wait, and anywhere from hours to days later the structure would rise once more, the departed amazon re-emerge, and all would fly away once more. Asked when the last visit had occurred, the crab indicated almost two moons ago. Based on that information, they party once more tried to search and poke around the bowl, even going so far as to take out seeds and drop them back in again. But still to no avail. After some discussion, they decided the best way to proceed was to go to the translucent bubble structure which they assumed was the Firebird Amazon lair. There they could search for the elusive pomegranate tree and/or approach the amazons and ask for help. 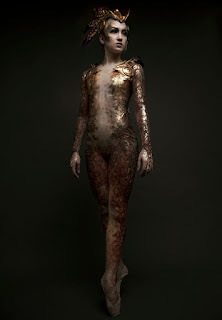 The party headed back to the ship, sailed up the coast a short jaunt to get closer to the bubbles, and then headed to shore once more. They decided to approach openly, in the hope the amazons would see they meant no hostile intent. After an hour or so crossing the island and climbing the low pine covered ridge that ran down the centre, the bubble structure appeared in a clearing a couple of hundred yards ahead. They didn't get much closer before a four amazons appeared from behind the structure. Three fanned out with javelins at the ready to cover the approaching party, while the fourth  stepped forward and called on the party (in Terocolidian) to halt and state their business. Chaff spoke up in answer, and explained the party meant to harm and wished only for assistance to deliver a message to the great Empyrius from some of his  former colleagues. The spokes-amazon (Hestiphalis) was brusquely non-committal until Chaff let slip something about helping Empyrius escape the mists. At that Hestiphalis became enraged, shouting that none shall take the Adonian from them.  As her three companions trotted forward to launch their missiles at the party, she raised hands and chanted a spell. Awg and Wilhelm were immediately paralyzed in place. Chaff rushed forward to get in closer range for a spell, while Kwinsea used the stole of the sacred to successfully cast silence 15' radius on Hestiphalis. The aquamancer then followed up with a seasong which dropped the three javelin wielding amazons into slumber. Realizing now she was outclassed, Hestiphalis turned and ran, outpacing the puffing Chaff and disappearing  once more behind the bubbles.

Kwinsea once more risked the stole to dispel the hold on Awg and Wilhelm. Seeing no hope of willing help from the amazons now, the party decided to kidnap one of the sleeping women and take her back to the ship to interrogate. Just as they prepared to do so, however, trouble appeared in the distance. Three amazons on flying snakes appeared over the bubbles, headed straight for the party. Looking to fly away as well, Chaff would use the ebony fly  to carry himself and their captive away. Kwinsea had a potion of flying, while Chaff planned to use the wand of flying on Awg and Wilhelm. Unfortunately the wand crumbled after using it on Awg, which would have meant abandoning the dour musketeer to his fate. Awg gallantly refused to  leave Wilhelm behind, so Chaff passed over the ring of invisibility and cast a transparency spell, hoping to two could avoid capture and make their way back to the shore and the ships boat. Luckily, the two made it, even though the woods around them soon filled with Firebird Amazons beating the bushes to find them. 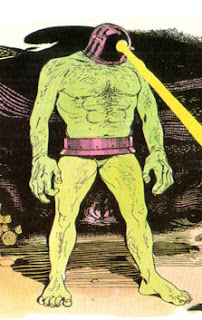 As for the aerial pursuit, Chaff, Kwinsea and captive made it back to the ship well ahead of the amazons. Chaff first of all sent all the male crew below, then slapped their captive (Isabella) awake and cast mind slave to charm and question her. With the two flying snakes fast approaching, Chaff asked that Isabella intercede on their behalf and convince her sisters that they meant no harm and just wanted to talk to Empyrius. The enthralled  amazon was more than happy to comply, and shouted to those now hovering overhead. She talked back and forth with the leader (Ianthinia), and seemed to convince her the party was safe. Her flying snake landed on the deck (the others remaining overhead) and Ianthinia alighted to talk (through the grovelling Chaff) to the obvious leader, Kwinsea. The details were a little opaque, but it seemed that  the Firebird Amazons relied on Empryius to perpetuate the species. Generally every couple of months, when the stars were right, one of the selected amazons would go to the dome to be with Empyrius.  The time was actually now nigh, so the party asked if they could use the opportunity to come along and try meeting with the Adonian. Ianthina noted that neither of her sisters were ready, but Empyrius might be interested in someone new i.e. Kwinsea. Recalling that Chaff once had to 'take one for the team' with the Pale Lady, she agreed to the plan.

Accompanied by the Firebirds, the party returned to the pavilion. They cleaned up Kwinsea and made her presentable, then handed her a single pomegranate seed and told her to drop it into the bowl. Then everyone else left to wait outside in the dunes. The structure settled in a smooth motion until the edge of the dome was level with the sand. At the bottom, Kwinsea found herself faced with a set of red and white stone doors, guarded by a monstrosity of a cyclops. Curiously, it had what looked light a metal helmet in place of its head, and when it turned to face the aquamancer, a beam of light emanated from its eye to illuminate her. A few moments later she observed another face in eye looking back at her; a round, fleshy, man's face. After watching her for a minute, the face disappeared and the cyclops pulled a key out of it's waist band. It unlocked the door, then led Kwinsea into a short tunnel to another door Which he obligingly unlocked and moved out of the way for her to pass through. She found herself in a wide corridor lined with polished copper plates and illuminated by crystal lanterns. Here awaiting the man she'd seen in the cyclops eye, who gestured her forward down the corridor and through yet another door. Once through, Kwinsea found herself in a garden with trees, a placid pool, and a path. All illuminated from above by a warm, yellow glow. She followed the path and around some trees, there coming up a blanket and pillows laid out on the ground. Standing there was a god-like figure, small wings on his back, and naked but for a layer of gold dust. This then, she established, was Empyrius. Apart from establishing that fact, and gloating over his own majesty, Empyrius would entertain no questions until other matters had been attended too ... 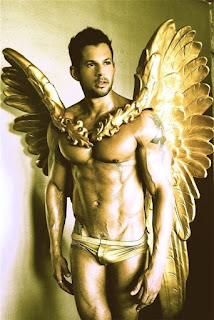 ... Once the opportunity to talk arose, Kwinsea learned a few things from Empyrius. In addition to having an immensely over-inflated opinion of himself, he was also quite content in his leisurely existence as the 'father' of the Firebird Amazons. Unlike his fellow Adonians who seemed to have driven themselves to insanity in attempts to escape the mists, he had no desire to leave. He admitted he had no means to beat the mist, and explained that it was some type of abstract intelligence from between the stars that fed on magical energies. It traveled the universes, looking for places of deep magical power, then separated them from their world to join the collection of lands the party knew as the "Far Isles". The mist would drop these lands onto a new world, then lift and search that globe for another source of magical energy to collect and feed off. The only way to stop it would be an anti-magic shield or mask of some sort, to block it's 'view' of the arcane emanations. But no mortal magic would due, since even the magnificent Empyrius could not deal with the mist. It would require power on the level of the gods themselves to do the trick.

Having learned all she could, Kwinsea made her goodbyes to the magnificent Empyrius, promising to return some day. She then worked her way back past the guardians and back up to rejoin the party. She explained all she'd learned, and assured the Firebird Amazons that they were now done with Empyrius and would be on their way. Turning the charmed Isabella over to her sisters, the party headed back to the "No Man's Sea" and prepared to sail for Xin to rest, recuperate, restock and plan what to do from here. After an uneventful passage (and a 6% customs fee), they found themselves a week later tying up to the docks of the Fogbound Quays.