Traveller - Welcome to the Symera Subsector 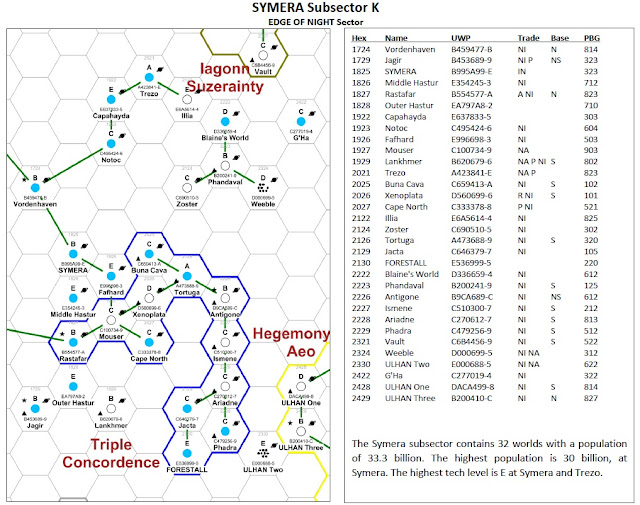 The "Edge of Night" sector includes over 400 star systems and marks the furthest spinward expansion of humanity from Terra-Ur. The name refers to "The Night"; a vast of rift of dust and gas, devoid of star systems, and much too wide to cross with existing jump technology. No one really knows what lies beyond "The Night"; likewise, many of the sectors' inhabited systems are largely unknown to those in more civilized space.

The Symera subsector sits near the centre of the sector. Its 32 systems exhibit a technological and population pattern typical of those regions of space devastated by the Nanite Epidemic. The high tech planets are depopulated and struggle to maintain existing technology levels, while lower technology worlds have higher populations, as they were either unaffected by the epidemic and/or absorbed a great number of refugees fleeing it's devastation. Even 200 years later, this pattern is evident. Although, as always, some individual systems are the exceptions that prove the rule.

Politically, the subsector is roughly divided between a mix of independent systems and the allied worlds of the Triple Concordance (which lies completely within the subsector).  In addition, polities from outside the subsector intrude to trailing (Hegemony of Aeo) and coreward (Iagonn Suzeranity), while to spinward in the Xiaochen subsector are the worlds of the Technocratic Union.

"The Hemegeny has no need for fanaticism; cold practicality and logic will guide us to our destiny."
Special Inquisitor Sivara Tizen

In the aftermath of the Fourth Interstellar war, several new and radical polities arose among the shattered remnants of the old republics.  Spinward of the old core of civilized space, the theocratic and militaristic  Hegemony of Aeo became the dominant state. In the century since the rule of "The One" began, the Hegemony has gradually but relentlessly expanded outward, swallowing independent systems and pocket empires alike. The Hegmony first appeared in the Symera subsector 30 years ago, absorbing several independent planets on the trailing border of the subsector. Though not actively expansionist in the subsector at the moment, it continues to push its influence and policies when prudent.
The Triple Concordance

"From many comes one; though the one must never forget who comes first."
Chief Executive Administrator Galvin of Antigone

Faced with the threat of the Hegemony of Aeo to the trailing and pressures from the Technocratic Union systems to the spinward, several of the previously independent worlds at the core of the Symera subsector grudgingly accepted cooperation over capitulation. The three most advanced systems  (Rastafar [1827], Tortuga [2126] and Antigone [2226]) initially joined in an alliance, and then dragged in the adjacent  lower tech and less powerful systems to provide resources and buffer zones against the threats surrounding them.  The three founding worlds rule as the Tri-Council, while the other ten systems sit on a General Council which can provide advice and feedback, but has little say in decision making. The Concordance has held up well when there is a clear and immediate threat, but in less hazardous times, relations are shaky and worlds act more in their independent self interest.

"Those who rule their technology need not fear it, but may rule by it."
Councillor Gaius Ralu

A very loosely confederated group of high technology worlds, the Technocratic Union uses its technological advantages to gain influence over less advanced systems. It is surrounded by a loose network of client systems which gain advantages in high technology and trade from the Union. In the Symera subsector, both Vordenhaven [1724] and Symera [1825] have close ties with the Union.

When the Sky-Dukes of Heilithium [2720] defeated the last attempt by the Empire of Trebazar to re-establish Imperial rule over their system, the once fractious nobles unexpectedly found themselves in possession of a captured Imperial naval squadron.  Sensing an opportunity to extend their wealth and power, the Sky-Dukes used the starships to embark over the next dozen years on an expansionist drive to spinward. Limited resources meant a limited conquest, but the Suzerainty now holds sway over a half dozen system. And at least some of the Sky-Dukes field ambitions of further  expansion to absorb the independent worlds to rimward in the Symera subsector.

Navy
The Concordance Navy consists of ships and officers provided  by the Tri-Council worlds. The enlisted men are drawn from the ships' home world, or from one of the worlds of the General Council. The quality of both ships and men vary widely, ranging from modern starships from services of proud tradition, to little more than reformed pirates and privateers.

The navy of the Hegemony of Aeo are the scions of orthodoxy and expansionism. The high command has great influence with "The One", and as such officers in the navy are held in high regard in society.

The Iagonn Suzerainty navy consists of starships still manned to a large extent by their original officers and crew, supplemented by new recruits from the Suzerainty worlds. Each ship is under the command of a Sky-Duke, but the day to day operations are in the hands of ex-Trebazar Imperial Navy men. The mix of professional military and plundering space-viking is interesting to say the least.

The independent systems of Jagir (1729) and Vordenhaven (1724) have small navies, but neither has  progressed much beyond the level of a glorified system defense force towards a truly jump capable interstellar navy.

Marines
Marines of the Concordance Navy serve as shipboard security, defending against both munity and boarding actions. On capital ships, they also provide at least some of the Gunners for turret mounted weapons. Very rarely, they provide advance landing forces to deal with minor insurrections or to gain a toehold ahead of  the army.  The Marines recruit officers and men from all systems in the Concordance. They are the most cosmopolitan of the Concordance forces, and tend to be strong supporters of the  alliance over individual worlds. As such, they are not trusted in higher circles.

The Hegemonic Assault Corps, while not quite as prestigious as the navy, is probably held in higher regard by the average person. It plays little or no role aboard ship, but is instead dedicated to ground assault. To be a member of the Corps is to drop unto a hostile planet with no protection but your assault pod, personal weapon, and [hopefully] a massive suppressive barrage from the fleet in orbit.

Army
With the exception of some low population, airless hellholes, nearly every system in the subsector boasts an army of some sort. They range from the spear armed levies of Outer Hastur; to the generally well equip and modern forces of the Triple Concordance and the Hegemony; and all points in between. Roles also range from intra-planetary conflicts, to planetary defense against out of system forces, to providing expeditionary forces to other systems in time of war.

Individual systems of the Triple Concordance maintain their own armies for local defense and other local uses. Each system also contributes a number of units, higher formations, and commanders to a standing Concordance Army for expeditionary and other tasks of common interest. As a general rule, this common army is held in high regard by the citizens of the Concordance worlds.

The armies of the Hegemony are much more focused on local defense, as well as providing occupation forces after the Assault Corps has captured a new planet. It's ranks are heavily filled by conscripts, and army service is typically not highly regarded.

The Iagonn Suzerainty has no single army, but each Sky-Duke has his or her own personal warband which both defend the home planet of Heilithium and provide the ship board and ground based military muscle when the fleet goes raiding and conquering.

Scouts
The "Honorable Company of Explorers and Cartographers", colloquially known as the Scouts, have a history that dates back almost to Terra-Ur. Or at least that's how they tell the tale. In any case, they are a vaguely paramilitary organization that have bases scattered through much of civilized space and operate outside the bounds of local political control. The Scouts are dedicated to collecting, maintaining and disseminating up-to-date information and star maps for the use of merchants, militaries and travellers alike. Scouts have a well deserved reputation for being tough, self-reliant and short-lived.

One place where the Scouts are not welcome is in the Hegemony. There, a organization known as the "Special Inquisitors" plays a similar role. They are also known to perform services as spies and special agents for the Hegemony. That said, the two organizations do maintain somewhat loose and informal ties, trading information when it suits them.

Merchants
Trade, like religion and war, is a basic human instinct and expansion among the stars hasn't changed that fact. Merchants range from local market hucksters selling their wares, to free traders trying to make a living on the margins of established trade routes, to powerful mega-corporations with interests across sectors and influence over governments (or sometimes forming the government themselves). There is little to differentiate merchants from one polity to the other; all are focused too much on making a profit to worry about politics; unless of course it can be influenced to their benefit.

Travellers Aid Society
Even more than the scouts, the true origins of the Travellers Aid Society are lost in the depths of history. It's rumored to have once been a secret society of powerful individuals, who conspired to control galactic affairs by masterminding events in order to gain political power and influence. Whether they had any success is anyone's guess. At this point in time the organization has evolved into a fraternal society dedicated to providing its members with assistance, connections and accommodations when travelling the far reaches or civilized space. It is still a very exclusive organization, its membership heavy with military officers, politicians and rich merchants.

In the years preceding the diaspora from Terra-Ur, popular pre-holo vids and books envisioned a galaxy teaming with intelligent, humanoid life. Once mankind reached the stars, the reality was that  sophants (tool and technology using lifeforms) were very rare. And humanoids were nearly non-existent. From the gas-giant dwelling Guri-Gura-Gi, though  the multi-ton somnolescent Dagokari, and onto the sentient crystals of the Mata-Madir system, intelligent alien life proved to be ... well, alien. Regular plant and animal life generally followed Terran norms, but intelligence had gone off on another tangent. Most alien societies are also incompatible with humanity's ethos, so there is little contact. As always, there are exceptions, and there are a few alien races that do interact and mingle with humanity, but such examples are rarely encountered in the Symera sub-sector. There are also persistent tales of a teaming empire of genocidal bug-eyed aliens beyond the Edge of Night rift, but most believe they are just bogyman stories to tell misbehaving children.