While waiting for the rest of the party to prepare for the trek to the Cerebral Shield of the Gann, Kern began to think about Duncal again. It had been a few weeks since they had last left the troubled heir, and given his history of trouble, Kern felt it was time to check in on him again. He convinced Erijay to join he and Bjorn for the trek through the winter snow to Sir Janus' lair. First though, Erijay had him open the metal box she and Lomar had recovered a few days before. Successfully opened, inside the found two items. A black ebony wand with the word "chinoes' inscribed on the butt; and a strange silver and gold bracelet, decorated with spiders, and with two spikes, one over and one under the hand. Taking these finds outside, the duo found a cute bunny and aimed both items at it. Erijay's wand did nothing she could see, but when Kern pressed a small gem on the under-spike, and a web shot forth at the poor bunny. Satisifed, he now started wondering how he could keep it from Lomar ...

Before leaving, Kern also gave a rousing speech to put the Stonehell Resistance Army (SRA) into action, and presented his rose hilt magic sword to Barfirth to cement that stuttering fighter's loyalty to the cause (and to himself). He also sent the SRA into town to get horses and supplies (and a new dog, Flipi, for Erijay). With that, Erijay, Kern and Bjorn headed out for the two day journey to the old drwarf hold where Sir Janus and Duncal awaited ...

... and almost didn't get there. On the first afternoon out, they heard the sound of harness jingling on the trail ahead. Quickly leaving the trail and hiding in a nearby copse of trees, they watched as the Company of Good Cheer rode into view. They watched with bated breath, hoping their trail would not be seen. For numerous reasons, neither wanted to tangle with Lord Merdwyn's tame adventurers at this point. Luckily the Company went on, headed presumably back towards Westmist. But Kern and Erijay both had the uncomfortable feeling that the Company was looking for them. And suddenly realized they may have tracked them to Sir Janus and Duncal! So the trio rode hellbent for leather through the snow, and were relived to find the camp just as they had left it. Speaking with Hafus, they learned to their relief that there had been no visitors. Hafus also let them know that Sir Janus' morale was flagging. And Duncal was being a pain. He had rarely left his tent since the winter cold hit, and had managed to insist on being assigned two man-servants to tend to his needs. With a sigh, Kern and Erijay went to speak the Si Janus, and managed to raise him out of his funk with news of the SRA. They then went to see Duncal. Calling out at his tent, there was no answer. They called again; no answer. Fuming, Erijay thrust aside the flap and marched inside; into a cold, deserted tent. There was no sign of Duncal or the other men, and the fire pit was cold. She tore outside, turning the air blue with curses no elf maid should know. She and Kern circled the tent, and found evidence of a trail leading away from a spot where the tent had been lifted up. The trial was slowly filling in with snow, so with a few more choice words about Duncal, Erijay, Kern and Bjorn saddled up and headed off deeper into the Western War Peaks.

They followed the trail to a point where a spur from the mountain reached down to the edge of the lake, the shore of which they were following. Seeing it partly frozen, they moved out onto to ice and traveled another few miles, coming to a point where a stream flowed out of the lake. Nearby was also a frozen marsh, in the centre of which could be seen a reed boat. Kern approached the boat, and inside found the dessicated remains of a dwarf covered in furs. He reached in to push the furs aside, when suddenly the corpse sat up and lunged for him! Kern called for help as he backed away, and Erijay and Bjorn answered with a barrage of magic missiles. Which ended that threat very quickly, and the corpse disintegrated into dust and rags. Which Kern pushed aside to uncover a find woven reed mat studded with small malachite gems.

That done, the party headed over to the stream. It was shallow and easily forded, but someone had recently pulled a fallen tree across it to use as a bridge. Figuring it must have been Duncal, they crossed over, and climbed into the wooded pass that led to the south-west. After several more hours riding, the sun was setting and the trio began thinking of setting up camp. Ahead they could see a crude collection of huts next to a stream. But before they could investigate, they were interrupted by fierce howls, as a mass of orcs jumped out of ambush beside the trail. The swarmed the three, and with nets and ropes tried to the pin them down. Kern Erijay and Flipi were successful, but Bjorn was pulled off his horse and held down with a knife to his throat. 'Surrender or he dies' croaked the leader. Seeing no other choice, Kern and Erijay put down their weapons and tried to negotiate. They had no luck, until someone mentioned trading their lives for a good meal of dwarf. That got the orcs interested, and they agree to let Erijay and Kern go to get 9 dwarves in trade for their lives, and the lives of the orcs other three prisoners (who Kern and Erijay quickly realized were Duncal and the two men). The orcs gave then 3 days, and kept Bjorn as a hostage. 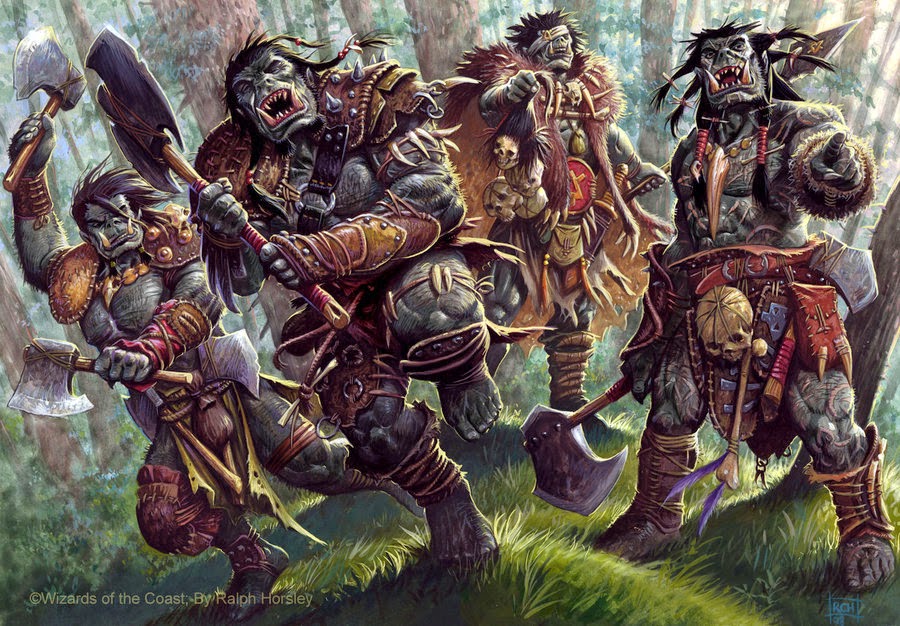 The orcs left with Bjorn, watching Kern and Erijay to make sure they went on their way. The two did, but set up camp about an hour away to sleep and plan. There was some of talk of actually going to find some dwarves, but in the end they decided on a  sneak attack. Waiting for the next nightfall, they headed back to the orc camp under cover of darkness and invisibility. Erijay set up a blind by casting web between a pair of trees. She then laid a fireball that incinerated half the camp, followed by a pair of sleep spells to drop the remaining orcs as they streamed from their huts. Meanwhile, Ken started firing his crossbow into the confusion, and it was not long before there was nothing left to do but slit some orc throats. Kern also checked out a hut that had guarded, and inside found Bjorn, Duncal, and the two men-at-arms. All naked and hog-tied, covered in some sort of cooking sauce. He unbound Bjorn and the two men, but left Duncal 'as is' while he went to search for treasure. Finding nothing, he returned to Duncal in a foul mood, and threw the trussed-up heir over his horse and berated him all the way back to Sir Janus. The hope was Duncal might actually learn his leason and not wonder off and get captured again ...